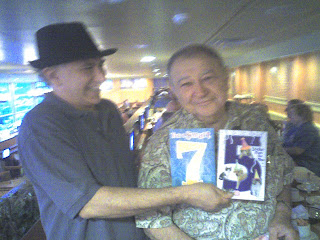 He's 7 in the tens column and 5 in the one's column. Congratulations, Pop.
Posted by Panama Red at 5:49 PM No comments: Links to this post

Email ThisBlogThis!Share to TwitterShare to FacebookShare to Pinterest
Labels: on a personal note...

NASA warming scientist: 'This is the last chance'

Exactly 20 years after warning America about global warming, a top NASA scientist said the situation has gotten so bad that the world's only hope is drastic action.

James Hansen told Congress on Monday that the world has long passed the "dangerous level" for greenhouse gases in the atmosphere and needs to get back to 1988 levels. He said Earth's atmosphere can only stay this loaded with man-made carbon dioxide for a couple more decades without changes such as mass extinction, ecosystem collapse and dramatic sea level rises.

"We're toast if we don't get on a very different path," Hansen, director of the Goddard Institute of Space Sciences who is sometimes called the godfather of global warming science, told The Associated Press. "This is the last chance."

Hansen brought global warming home to the public in June 1988 during a Washington heat wave, telling a Senate hearing that global warming was already here. To mark the anniversary, he testified before the House Select Committee on Energy Independence and Global Warming where he was called a prophet, and addressed a luncheon at the National Press Club where he was called a hero by former Sen. Tim Wirth, D-Colo., who headed the 1988 hearing.

To cut emissions, Hansen said coal-fired power plants that don't capture carbon dioxide emissions shouldn't be used in the United States after 2025, and should be eliminated in the rest of the world by 2030. That carbon capture technology is still being developed and not yet cost efficient for power plants.

Burning fossil fuels like coal is the chief cause of man-made greenhouse gases. Hansen said the Earth's atmosphere has got to get back to a level of 350 parts of carbon dioxide per million. Last month, it was 10 percent higher: 386.7 parts per million.

Hansen said he'll testify on behalf of British protesters against new coal-fired power plants. Protesters have chained themselves to gates and equipment at sites of several proposed coal plants in England.

"The thing that I think is most important is to block coal-fired power plants," Hansen told the luncheon. "I'm not yet at the point of chaining myself but we somehow have to draw attention to this."

Frank Maisano, a spokesman for many U.S. utilities, including those trying to build new coal plants, said while Hansen has shown foresight as a scientist, his "stop them all approach is very simplistic" and shows that he is beyond his level of expertise.

The year of Hansen's original testimony was the world's hottest year on record. Since then, 14 years have been hotter, according to the National Oceanic and Atmospheric Administration.

Two decades later, Hansen spent his time on the question of whether it's too late to do anything about it. His answer: There's still time to stop the worst, but not much time.

"We see a tipping point occurring right before our eyes," Hansen told the AP before the luncheon. "The Arctic is the first tipping point and it's occurring exactly the way we said it would."

Hansen, echoing work by other scientists, said that in five to 10 years, the Arctic will be free of sea ice in the summer.

Longtime global warming skeptic Sen. James Inhofe, R-Okla., citing a recent poll, said in a statement, "Hansen, (former Vice President) Gore and the media have been trumpeting man-made climate doom since the 1980s. But Americans are not buying it."

Posted by Panama Red at 10:55 PM No comments: Links to this post

The treatment uses umbilical and marrow cells to help develop normal skin. Doctors say it may move his genetic disorder 'off the incurable list' for other patients.

Using stem cells from umbilical cord blood and bone marrow, researchers have apparently cured a fatal genetic disease in a 2-year-old Minneapolis boy, a feat that could open the door for a variety of stem cell treatments.

For the first time in his life, Nate Liao is wearing normal clothes, eating food that has not been pureed and playing with his siblings.

"Nate's quality of life is forever changed," said Dr. John Wagner of the University of Minnesota Medical School, who performed the treatment. "Maybe we can take one more disorder off the incurable list."

The team has subsequently treated Nate's 5-year-old brother Jacob and is preparing to treat 9-month-old Sarah Rose Mooreland of Folsom, Calif., and hopes are high for them as well.

Nate suffers from recessive epidermolysis bullosa, a genetic disease that affects one in every 100,000 children. Such children lack a critical protein called collagen type VII that anchors the skin and lining of the gastrointestinal system to the body.

The only treatment previously has been to keep the children wrapped in bandages to protect the skin as much as possible.

The idea of using circulating stem cells to treat the condition was developed by Dr. Angela M. Christiano of Columbia University Medical Center. This is the first time that cells from bone marrow and cord blood have been used to treat a condition that does not involve blood.

After perfecting the approach in mice, the team treated Nate seven months ago. Nate went first because one of his brothers was a good genetic match. Jacob received cells from a non-familial donor.

More important, his face is plumped up and he has fewer blisters. New skin now covers his right leg, which once had only a translucent purple-and-red coating over his internal tissues and veins. And he is eating Oreos and chicken noodle soup and begging for more.

"I have watched Nate improve every day," said his mother, Theresa Liao. "It has been slow, but I believe we are on the road to him getting better."

The results will be published in a future issue of the New England Journal of Medicine.

Posted by Panama Red at 9:24 PM No comments: Links to this post

Email ThisBlogThis!Share to TwitterShare to FacebookShare to Pinterest
Labels: science

They may real­ly feel they hear paint­ings, for in­s­tance. But the con­di­tion does­n’t oc­cur on­ly with sound and sight: the most bi­zarre forms of it have been re­ported.

His found that most of us tend to agree with syn­aes­thetes on which im­ages match which sounds, and that we pre­fer them com­bined rath­er than alone.

Kan­din­sky, who lived from 1866 to 1944, “wanted to make vis­u­al art more like mu­sic—more ab­strac­t,” Ward said. “He al­so hoped that his paint­ings would be ‘heard’ by his au­di­ences. This seems more achiev­a­ble now that we have found such a strong link be­tween vi­sion and hear­ing.”

“Although in­for­ma­tion from the world en­ters our heads vi­a dif­fer­ent sen­so­ry or­gans—the eyes and ears in this in­stance—once they are in the brain they are in­ti­mate­ly con­nect­ed with each oth­er. Im­pres­sive­ly, they are con­nect­ed in non-random ways, so that some com­bi­na­tions of sound and vi­sion go to­geth­er bet­ter than oth­ers.”

This shows, he said, that while non-syn­aes­thetes can’t hear a paint­ing or see mu­sic lit­er­ally, they do sense the cross­o­ver and tend to choose the “cor­rect” im­age. “All of us have links be­tween our hear­ing and vi­sion—even if we don’t really realise it,” Ward said.

That’s not to say that synaes­thetes hear pre­cise­ly the same sounds in “lis­ten­ing” to a Kan­din­sky paint­ing.

De­scrib­ing the art­ist’s “Com­po­si­tion VIII, 1923,” Ward re­ported, one synaes­thete said: “The jum­bled mass of lines gave var­i­ous tones, which changed as my eyes trav­elled round the pic­ture. When look­ing at the large mul­ti­coloured pow­er­ful cir­cle at up­per left, I get a pure tone which can be too much, so to re­lieve my mind of this I trav­el back to the ca­coph­o­ny of jum­bled lines and shapes. This paint­ing there­fore is a good bal­ance of con­trast­ing noise—pure tones and ca­coph­o­ny—which was a de­light to see.”

Anoth­er de­scribed it as fol­lows: “There is a huge splurge of sound left-hand top—boom­ing and vul­gar! Be­low it is a mousy lit­tle meee sound which then trans­lates in­to ‘o­h’s and ‘ah’s and pops at the var­i­ous cir­cles. The lines are sharp and are mov­ing to the right with the sound of steel—like blades scrap­ing against one anoth­er. The tri­an­gle and boom­er­ang shape are sur­prised and pop up laugh­ing with a ‘whooo’.”

The next stage of the re­search will use brain scans to mon­i­tor the brains of synaes­thetes when Kan­din­sky trig­gers sound or when sound trig­gers a vi­sion, Ward said.
Posted by Panama Red at 8:42 PM No comments: Links to this post