Lyrics to Crank That Soulja Boy :
(Yoooouuuu!)
Soulja boy I tell 'em
Hey I got a new dance fo you all called the soulja boy
(Yoooouuuu!)
You gotta punch then crank back three times from left to right
(Aaaaaaaahhhhhhhh yeeeeaaaah!)

[Verse 1:]
Soulja Boy Off In This Hoe
Watch me Lean And Watch Me Rock?
Super Man Dat Hoe
Then Watch me Crank Dat Robocop?
Super Fresh, Now Watch Me Jock
Jocking On Them Haterz Man
When I Do Dat Soulja Boy
I Lean To The Left And Crank Dat Dance
(Now You)
I'm Jocking On Yo Bitch Ass
And If We Get The Fightin
Then I'm Cocking On Your Bitch
You Catch Me At Yo Local Party
Yes I Crank It Everyday
Haterz Get Mad Cause
"I Got Me some Bathing Apes"

Haterz wanna be me
Soulja Boy, I'm the man
They be lookin' at my neck
Sayin' it's the Rubberband Man, man
Watch me do it, watch me do it
Dance, dance
Let get to it, let get to it

Posted by Panama Red at 7:56 PM 2 comments: Links to this post

Posted by Panama Red at 9:00 AM No comments: Links to this post

Voting for McCain is Racist

McCain's plays to the nut-job faction of his party's far right by stirring up racism. This became obvious when he used the phrase, "that one" as an epithet to describe the Senator from Illinois, instead of the usual address of "my distinguished colleague."

Still have doubts? This was carried on the AP:

Lewis' comments followed reported examples of anger at McCain-Palin rallies that has been aimed at Obama, the first black man to be a major party's nominee for president. GOP supporters have shouted "traitor," "terrorist," "treason," "liar" and "off with his head."

McCain defended his audiences, saying most who attend the rallies are "good and decent and patriotic Americans."

"To somehow intimate that the overwhelming majority of those people, with rare exception, are somehow not good Americans or are motivated by anything but the most patriotic motives is insulting and I won't accept that insult," he said.

Apparently his idea of what is "good and decent and patriotic" is a little weird. According to McCain, chants of "off with his head" were motivated by the "most patriotic motives" and suggesting otherwise is an insult. World, please note, most Americans would not agree with this sentiment.

This is the 21st Century for crying out loud. Racism, incitements to violence, and mob mentality are not good for America and are not patriotic. They are embarrassing.

John, Sarah: We anxiously await your apology.
Posted by Panama Red at 6:57 PM No comments: Links to this post

Thought for the weekend

Email ThisBlogThis!Share to TwitterShare to FacebookShare to Pinterest
Labels: religious 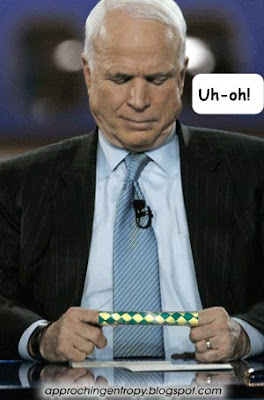 Posted by Panama Red at 11:38 PM No comments: Links to this post

Jack Cafferty on Sarah Palin (one 72 year old heartbeat away)

Posted by Panama Red at 4:43 PM No comments: Links to this post