The most important thing Obama can do to restore faith in the American government, both nationally and internationally.

WASHINGTON – The incoming Obama administration should launch a criminal investigation of Bush administration officials to see whether they broke the law in the name of national security, a House Democratic report said Tuesday. President-elect Barack Obama has been more cautious on the issue and has not endorsed such a recommendation.
Along with the criminal probe, the report called for a Sept. 11-style commission with subpoena power, to gather facts and make recommendations on preventing misuse of power, according to the report by the Democratic staff of the House Judiciary Committee.
The report covers Bush administration policies that Democrats have protested for some time. Among them: interrogation of foreign detainees, warrantless wiretaps, retribution against critics, manipulation of intelligence and political dismissals of U.S. attorneys...

...The criminal investigation would include issues apart from national security, such as whether laws were violated in the politically inspired firing of U.S. attorneys.

Rep. John Conyers, D-Mich., chairman of the Judiciary Committee, said his staff has met with the Obama transition officials on the report. The president-elect's transition team has not endorsed it.

The congressionally appointed commission should have subpoena power, the report said. It suggested the new president order "full cooperation by all present and past federal employees with requests for information."

Conyers already has introduced legislation to form the commission.

Email ThisBlogThis!Share to TwitterShare to FacebookShare to Pinterest
Labels: politics

Do not pity Hamas. They asked for this.

Q: How can Israel justify killing civilians if their intent is to crush Hamas?

A: The death of innocents is a tragic inevitability of war. Our hearts go out to all those caught in the middle. The sad fact is that the Palestinian people are being held hostage by Hamas. Just as it is clear that Hamas is morally culpable for any harm done to Gilad Shalit, the Israeli hostage that they hold, so too are they culpable for the fate of Palestinian innocents amongst whom they hide. A civilian who is killed while being used by a terrorist as a human shield is a victim of the terrorist, not the Israeli army, who does not target innocent civilians.

A: If Israel's purpose was to take revenge, then perhaps the question of "proportion" would apply here. But Israel is waging a defensive war. In war, you don't measure your response to the enemy by what they have done to you in the past, but rather by what needs to be done to stop them from attacking you. Israel must destroy Hamas' capability to continue shooting rockets at Israeli cities. Israel's actions are proportionate to the present and future threat, not just the damage done in the past.

Q: Doesn't Israel understand that they are just creating more terrorists? The anger and fury at Israel as a result of bombing Gaza will only make more people want to join Hamas.

A: Feelings of frustration, anger, fear and rage do not make you into a terrorist. A culture of death and an education of hate does. Israel doesn't need to do anything to create terrorists - Islamic extremism does that - but Israel must act to destroy those who threaten its people.

Q: Hamas indeed has a militant wing, but it also does a lot of good. They are responsible for social programs, educational projects and humanitarian work in Gaza. By destroying Hamas, Israel also destroys all the good they do. Aren't we demonizing a group that is not all bad?

A: If a serial killer also happens to volunteer for his local hospital, has donated money to an orphanage, and looks after his ailing grandmother, he is still a serial killer, and he and the threat he represents must be treated as such. The danger he poses far outweighs the concern for any good he may do.

Q: By using violence, how is Israel any better than its terrorist enemies?

A: That is as ridiculous as saying that a woman who fights off an attacker is no better than her attacker. Israel would not touch Hamas if Hamas would stop sending rockets and suicide bombers into Israel. Israel seeks to live in peace with its neighbors; Hamas and its allies seek to destroy Israel, no matter what Israel does.

The Hamas terrorist fears times of peace, because then he has no purpose. The Israeli soldier dreams of a time when peace will reign. Then, the Israel Defense Force will be made joyously redundant, as "one nation will not lift a sword against another nation, and they will no longer learn to wage war".
Posted by livesimply at 7:34 AM

No, its not a UFO

Its a birthday cake with 75 candles on it. Again, I swear its not photoshopped. 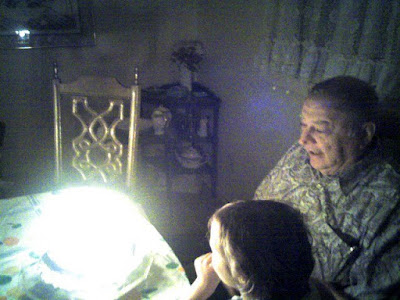 Posted by livesimply at 1:17 AM

Email ThisBlogThis!Share to TwitterShare to FacebookShare to Pinterest
Labels: on a personal note...

New Restaurant where Black Angus used to be.

I swear this is not photoshopped. The Black Angus in my neighborhood had a light out on their sign. It was like this for weeks.

Posted by livesimply at 1:59 AM

Email ThisBlogThis!Share to TwitterShare to FacebookShare to Pinterest
Labels: fun

Bushisms over the years

President George W. Bush will leave behind a legacy of Bushisms, the label stamped on the commander in chief's original speaking style. Some of the president's more notable malaprops and mangled statements:
___

• "I know the human being and fish can coexist peacefully." — September 2000, explaining his energy policies at an event in Michigan.

• "Rarely is the question asked, is our children learning?" — January 2000, during a campaign event in South Carolina.

• "It would be a mistake for the United States Senate to allow any kind of human cloning to come out of that chamber." — April 10, 2002, at the White House, as Bush urged Senate passage of a broad ban on cloning.

• "I want to thank the dozens of welfare-to-work stories, the actual examples of people who made the firm and solemn commitment to work hard to embetter themselves." — April 18, 2002, at the White House.

• "Our enemies are innovative and resourceful, and so are we. They never stop thinking about new ways to harm our country and our people, and neither do we." — Aug. 5, 2004, at the signing ceremony for a defense spending bill.

• "Too many good docs are getting out of business. Too many OB/GYNs aren't able to practice their love with women all across this country." — Sept. 6, 2004, at a rally in Poplar Bluff, Mo.

• "Our most abundant energy source is coal. We have enough coal to last for 250 years, yet coal also prevents an environmental challenge." — April 20, 2005, in Washington.

• "I can't wait to join you in the joy of welcoming neighbors back into neighborhoods, and small businesses up and running, and cutting those ribbons that somebody is creating new jobs." — Sept. 5, 2005, when Bush met with residents of Poplarville, Miss., in the wake of Hurricane Katrina.

• "It was not always a given that the United States and America would have a close relationship. After all, 60 years we were at war 60 years ago we were at war." — June 29, 2006, at the White House, where Bush met with Japanese Prime Minister Junichiro Koizumi.

• "Make no mistake about it, I understand how tough it is, sir. I talk to families who die." — Dec. 7, 2006, in a joint appearance with British Prime Minister Tony Blair.

• "These are big achievements for this country, and the people of Bulgaria ought to be proud of the achievements that they have achieved." — June 11, 2007, in Sofia, Bulgaria.

• "Mr. Prime Minister, thank you for your introduction. Thank you for being such a fine host for the OPEC summit." — September 2007, in Sydney, Australia, where Bush was attending an APEC summit.

• "Thank you, Your Holiness. Awesome speech." April 16, 2008, at a ceremony welcoming Pope Benedict XVI to the White House.

• "The fact that they purchased the machine meant somebody had to make the machine. And when somebody makes a machine, it means there's jobs at the machine-making place." — May 27, 2008, in Mesa, Ariz.

• "And they have no disregard for human life." — July 15, 2008, at the White House. Bush was referring to enemy fighters in Afghanistan.

• "I remember meeting a mother of a child who was abducted by the North Koreans right here in the Oval Office." — June 26, 2008, during a Rose Garden news briefing.

• "Throughout our history, the words of the Declaration have inspired immigrants from around the world to set sail to our shores. These immigrants have helped transform 13 small colonies into a great and growing nation of more than 300 people." — July 4, 2008 in Virginia.

• "The people in Louisiana must know that all across our country there's a lot of prayer — prayer for those whose lives have been turned upside down. And I'm one of them. It's good to come down here." — Sept. 3, 2008, at an emergency operations center in Baton Rouge, La., after Hurricane Gustav hit the Gulf Coast.

Do something that does not compute

Love the quick profit, the annual raise,
vacation with pay. Want more
of everything ready-made. Be afraid
to know your neighbors and to die.
And you will have a window in your head.
Not even your future will be a mystery
any more. Your mind will be punched in a card
and shut away in a little drawer.
When they want you to buy something
they will call you. When they want you
to die for profit they will let you know.

So, friends, every day do something
that won't compute. Love the Lord.
Love the world. Work for nothing.
Take all that you have and be poor.
Love someone who does not deserve it.
Denounce the government and embrace
the flag. Hope to live in that free
republic for which it stands.
Give your approval to all you cannot
understand. Praise ignorance, for what man
has not encountered he has not destroyed.

Ask the questions that have no answers.
Invest in the millenium. Plant sequoias.
Say that your main crop is the forest
that you did not plant,
that you will not live to harvest.
Say that the leaves are harvested
when they have rotted into the mold.
Call that profit. Prophesy such returns.

Put your faith in the two inches of humus
that will build under the trees
every thousand years.
Listen to carrion - put your ear
close, and hear the faint chattering
of the songs that are to come.
Expect the end of the world. Laugh.
Laughter is immeasurable. Be joyful
though you have considered all the facts.
So long as women do not go cheap
for power, please women more than men.
Ask yourself: Will this satisfy
a woman satisfied to bear a child?
Will this disturb the sleep
of a woman near to giving birth?

Go with your love to the fields.
Lie down in the shade. Rest your head
in her lap. Swear allegiance
to what is nighest your thoughts.
As soon as the generals and the politicos
can predict the motions of your mind,
lose it. Leave it as a sign
to mark the false trail, the way
you didn't go. Be like the fox
who makes more tracks than necessary,
some in the wrong direction.
Practice resurrection.
Posted by livesimply at 1:34 AM